Seminar I: The Long-Run Dynamics of Gender Gaps 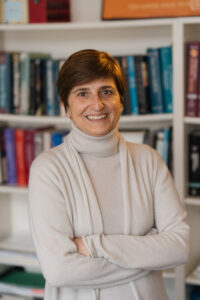 Claudia Olivetti is the George J. Records 1956 Professor of Economics at Dartmouth College and a Research Associate in the NBER’s Labor Studies and Development of the American Economy Programs. She is the co-director of the NBER Study Group on “Gender in the Economy.” Her research focuses on women in the labor market including wages, hours, and careers and on intergenerational mobility and marriage institutions in historical perspective. She has worked on the baby boom and maternal health and on historical and comparative perspectives on the gender gap. Olivetti received her Ph.D. in economics from the University of Pennsylvania in 2001, and also holds a Laurea in Statistics and Economics from the University of Rome-La Sapienza. Prior to joining Dartmouth College, Olivetti was on the faculty at Boston College and Boston University, and a Fellow at the Radcliffe Institute for Advanced Studies at Harvard University. Olivetti has received grants from the National Science Foundation, the Russell Sage Foundation and the Norwegian Research Council. Her work has been published in the top economics journals, including the American Economic Review, the Journal of Political Economy, the Review of Economic Studies and the Quarterly Journal of Economics.

Women earn far less than men, and that is especially true of mothers relative to fathers. Much of the widening occurs with family formation. Women with young children work far fewer hours per week than do others. But what happens on the ‘other side of the mountain’ as the children grow up and eventually leave home? The answer is that women work more hours and transition to higher-earning positions. The motherhood penalty is greatly reduced, and by their 50s women with and without children earn nearly the same amount. But fathers manage to maintain their relative gains and do monumentally better than mothers, women without children and men without children.