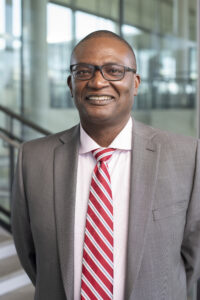 Kerwin K. Charles is the Indra K. Nooyi Dean and Frederic D. Wolfe Professor of Economics, Policy, and Management at the Yale School of Management.

During his scholarly career, Dean Charles has studied and published on topics including earnings and wealth inequality, conspicuous consumption, race and gender labor market discrimination, the intergenerational transmission of economic status, worker and family adjustment to job loss and health shocks, non-work among prime-aged persons, and the labor market consequences of housing bubbles and sectoral change. He is a Research Associate at the National Bureau of Economic Research and an elected Fellow of the Society of Labor Economics. He serves on the Board of Trustees of the Panel Study of Income Dynamics, is a member of the Federal Economic Statistics Advisory Committee, and sits on the Editorial Board of the Journal of Labor Economics.

Between 2001 and 2014, more than 6,500 American soldiers died while serving in Afghanistan and Iraq. Using data from the Defense Manpower Data Center on soldiers’ home states and exact dates of death, and date-specific labor supply information from the CPS-ORG, we find that labor supply among Muslim and Arab men from a state sharply declines in the two specific weeks following news of the death of a U.S. soldier from that state. Since news of a death of a U.S. soldier in the Middle East arguably causes a time- and state-specific shock to anti-Arab and anti-Muslim prejudice in the U.S., and because working less reduces interaction with others, we argue that our findings are consistent with the main but rarely directly tested prediction of Becker-style discrimination models that potential objects of prejudice-based discrimination will take costly actions to avoid interactions with those who harbor biased sentiments against them.


Join Our Mailing List
GW uses cookies and other technology on our websites to improve your website experience and to better understand how you use our websites. Visit GW’s Website Privacy Notice to learn more about how GW uses cookies and, if you should choose, how to disable them. I understand that by clicking “I consent” and continuing to use this website, I agree to GW’s use of cookies.I consent